Winner Off-Piste gets bridegroom to the church on time

The striking-looking, blue-hulled yacht from the Royal Yacht Club of Tasmania also placed second in the PHS division,  won by Stephen McElwee’s Green 31 Lawless from the Port Dalrymple Yacht Club.

Lawless and Off-Piste raced up the Derwent together on Tuesday evening with Lawless crossing the line just over 16 minutes ahead  to take corrected time honours under PHS scoring.  Lawless was not nominated for either the AMS or IRC handicap categories.

Small yachts filled all but one divisional placing on corrected time in this slow race which saw the line honour’s winner, Gary Smith’s The Fork in the Road’s elapsed time of 2 days and 49 seconds being the slowest in the nine L2H races so far sailed.

It was an especially frustrating race for crew member James Pirie who was due to be married at Pipers Brook,  north of Launceston,  last evening.

“We sat looking at the same piece of coastline south of Banks Strait through three watches and even considered some contingency plans,” said skipper Paul Einoder, a Hobart orthopaedic surgeon at yesterday prize-giving at the Derwent Sailing Squadron.

Then, he too, had to make a dash north up the Midland Highway to be best man at the wedding.

Smart tactical sailing in the light winds down Tasmania’s East Coast saw Off-Piste steady improve her position in the fleet,  especially against her peers in the 30-34 foot LOA (length overall) group in the 27 boat fleet.

Off-Piste also took out the IRC rated Division, winning Tony Williams’ IMS 38 Martela from BYC, the only yacht above 11m LOA to gain a place on corrected time. Third in the IRC division was Malcolm Cooper’s Snook 30 which was the third last boat to finish.

The win by the 9.7m LOA Lawless in PHS was only the second division (category) victory by a yacht from a Tamar yacht club in the nine L2H races.

Skipper Stephen McElwee, a former Mirror dinghy state and national champion, is a committee member of the Port Dalrymple Yacht Club of which his father Ian was a founding member. Stephen’s son Nick was in the crew of Lawless.

Originally designed, built and raced by Victorian yachtsman John Green, Lawless finished second overall in the stormy 1984 Sydney Hobart in which 105 boats retired from the fleet of 151 starters. 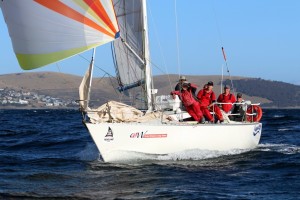 McElwee has owned Lawless for the past decade and has contested several L2H races with the 2015 race his most successful.  Well positioned as the fleet sailed down on the East Coast, MCElwee sailed a course relatively close inshore and picked some favourable breezes.

In the PHS category, Lawless won from Off-Piste and Silcon Ship to complete almost a clean sweep handicap results for yachts in 30 to 34 foot LOA range.

Most yachts in the L2H race are expected to hoist their sails again on Saturday, 2 January to contest the National Pies King of the Derwent which is the final event for the coveted Three Races Trophy.