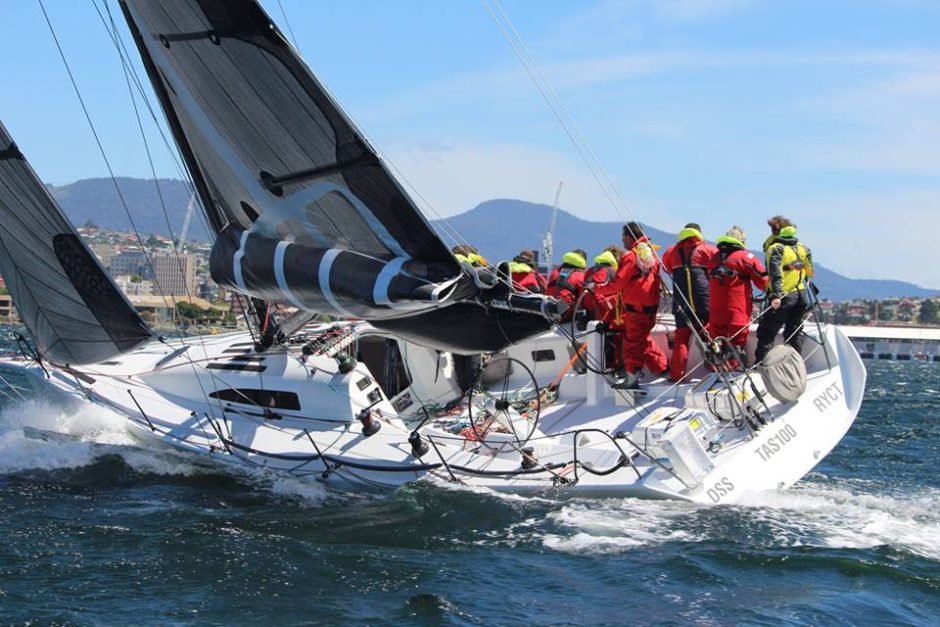 A storm force wind gust of 64 knots at Tasman Island in the early hours of today almost ended the Launceston to Hobart ocean race for leaders The Fork in the Road and Tilt.

Extraordinarily, the two ocean racing yachts were just two boat lengths apart when the front hit at the peak of an epic race in which the lead changed at least ten times. Through good seamanship, both yachts survived to finish first and second across the line in the 285 nautical mile race, but no so for Rad, then third in fleet, which was dismasted.

The Fork in the Road, a Bakewell-White 45 skippered by Gary Smith, finished late this morning with the north-westerly wind still gusting to 45 knots on the River Derwent. Tilt, Peter and Catherine Cretan’s Marten 49, finished 14 minutes later under a number 3 jib, their mainsail ripped to pieces by the vicious wind gusts at Tasman Island.

“We got hit by a 64 knot gust howling out of the narrow channel between the high cliffs of Tasman Island and the Tasman Peninsula, and but for helmsman Steve Walker pulling away we would have got flattened,” Smith said after skippering The Fork in the Road to its seventh L2H line honours victory.

Peter Cretan’s report was even more dramatic. “The gust that hit us was 55 knots….it flattened the boat…the masthead was in the water and we lost our wind instruments,” he recalled. “We went on to sail across Storm Bay under a Code 0 and up the river with a number three headsail.” “It was a epic sail from start to finish…the lead changed at least 10 times…we had a tacking duel down the Mercury Passage inside Maria Island and then a gybing duel across Marion Bay,” added Cretan, elated with being able to finish the Riversdale Estate Wines L2H race, even without a mainsail.

Filepro finished third this afternoon, followed by Philosopher and Heatwave. The next boats expected late this afternoon and this evening were Zephyr, Prion, Helsal V, Sagittarius, Crescendo, Ultimate Challenge and As Good As It Gets.

Eight yachts have now retired from the race, include Rad, Brent McKay’s Radford 35I which was dismasted off Tasman Island. Other retirements have been Whirlwind, Talofa, Phase Three, Mischief, Illusion, B&G Advantage and Avenger.

Riversdale Estate I Derwent Sailing Squadron Inc I Tamar Yacht Club I Fork In The Road Sailing I Gary Smith I Peter Cretan I Catherine Cretan I FilePro Sailing I Tim Gadsby I Philosopher Sydney 36CR FBYD Modified. I Shaun Tiedemann I Ian Johnston I Sally Smith I John Hall I Vaughan Lynch I Ultimate Challenge I Peter Jenkins I Ian Marshall I Stewart Geeves I Peter Campbell I Peter Watson I Australian Sailing – Tasmania