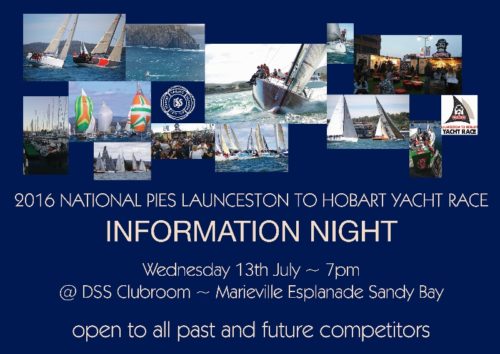 This year marks the 10th anniversary of the Launceston to Hobart yacht race. The Derwent Sailing Squadron in conjunction with the Tamar Yacht Club will again conduct the race starting from Beauty Point on Tuesday 27th December 2016.

The Commodore of the Derwent Sailing Squadron would like to extend an invitation to all eligible yacht owners to participate in this year’s event. The Squadron is hoping for a record number of entries this year to mark the significant 10th anniversary of what has become Tasmania’s most prestigious offshore race. The Squadron is promoting the event widely throughout Tasmania and interstate and we are expecting a number of entries from Victorian and South Australian yacht clubs

The race this year will again be sponsored by National Pies who will invest significant capital and time in promoting the race and ensuring that the 10th anniversary will be a major yachting event in the end of year sailing calendar.

On Behalf of the Derwent Sailing Squadron we again extend a warm invitation to consider entering the 10th anniversary of the Launceston to Hobart yacht race and  hope to see you all on Wednesday 13th July.