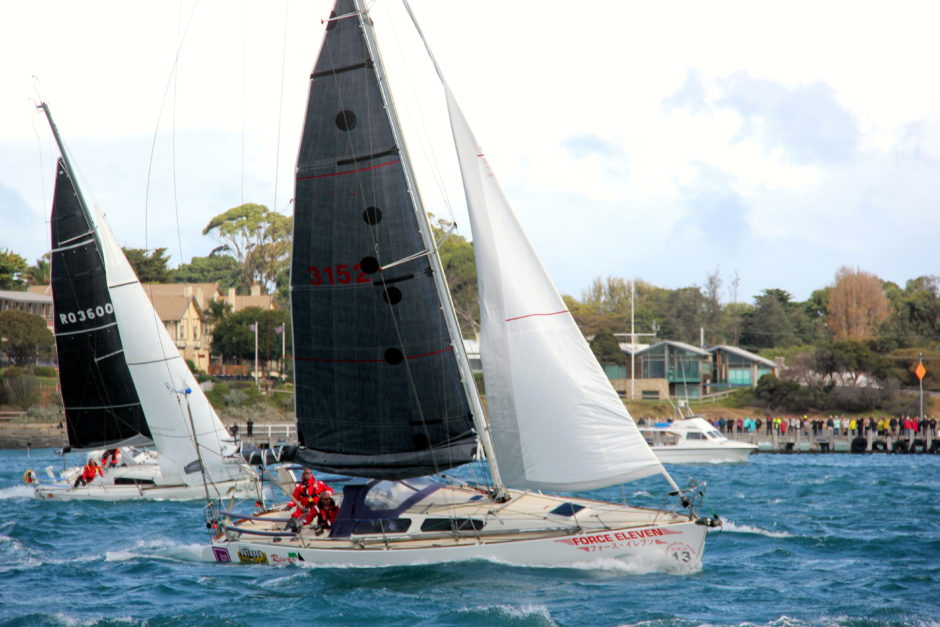 The gruelling voyage from Australia to Japan added 5,500 nautical miles (and more) to the thousands of sea miles the Launceston yachtsman has sailed in Force Eleven, including the Melbourne to Vanuatu and winning the two-handed division of last’s Melbourne to Hobart West Coaster.

Force Eleven is one of three entries from Tamar River Club among the fine fleet of 25 yachts entered for this year’s Riversdale Estate Wines Launceston to Hobart race.

The Derwent Sailing Squadron yesterday announced entries for the 285 nautical mile race along the rugged northern and eastern coastline of Tasmania.

Three Tasmanian enterprises, the Derwent Sailing Squadron,the Tamar Yacht Club and Riversdale Estate Wines have again joined forces to conduct and promote the race which will start from Beauty Point at 9am on Tuesday, 27 December.

Lawless, which finished second overall in the 1984 Sydney Hobart, continues to race competitively at club level. This will the 31-footer’s fifth L2H race.

Sassy, designed by Andrew Skrzat and built in Poland, will be sailed by the same crew of family and friends was in last year’s L2H.

The fleet size has grown from last year’s, again a quality line-up of many of the State’s most prominent racing yachts.

Heading the Riversdale Estate Wines L2H 2018 fleet is race record-holder The Fork in the Road, Gary Smith’s Bakewell-White 42 which has taken line honours six times since the L2H was inaugurated in 2000, and also won one race overall on corrected time.

Last year’s AMS, IRC and PHS and overall winner, Mako, is not entered but runners-up in the three handicap categories, Prion (AMS),Footloose (PHS) and B&G Advantage (IRC) are lining up again.

This year the overall winner of the Launceston to Hobart will be the first placed yacht under IRC scoring, in keeping with the Combined Clubs move to make IRC the premier scoring system for the Summer Pennants,Inshore Championship, Offshore Trophy and major races.

Newcomer to the L2H, with strong potential under IRC and AMS is Shaun Tiedemann’s Philosopher, a Sydney 36cr and three times Australian Yachting IRC champion, which has proven to be a very competitive yachting Hobart and nationally.

Philosopher is contesting the Maria Island race this weekend for the third consecutive year, having been runner-up in that even tunder IRC and AMS in 2016 and 2017, winning PHS in 2017. (Editor’s note:  Philosopher subsequently won the Maria Island Race)

Another strong IRC contender in the L2H is the syndicate owned Filepro, a Lyon 40 skippered by Tim Gadsby which previously contested this race as Nexedge in 2015.

The Victorian entry is Saltair, Sarah Allard’s Elan 410 from the Royal Yacht Club of Victoria.