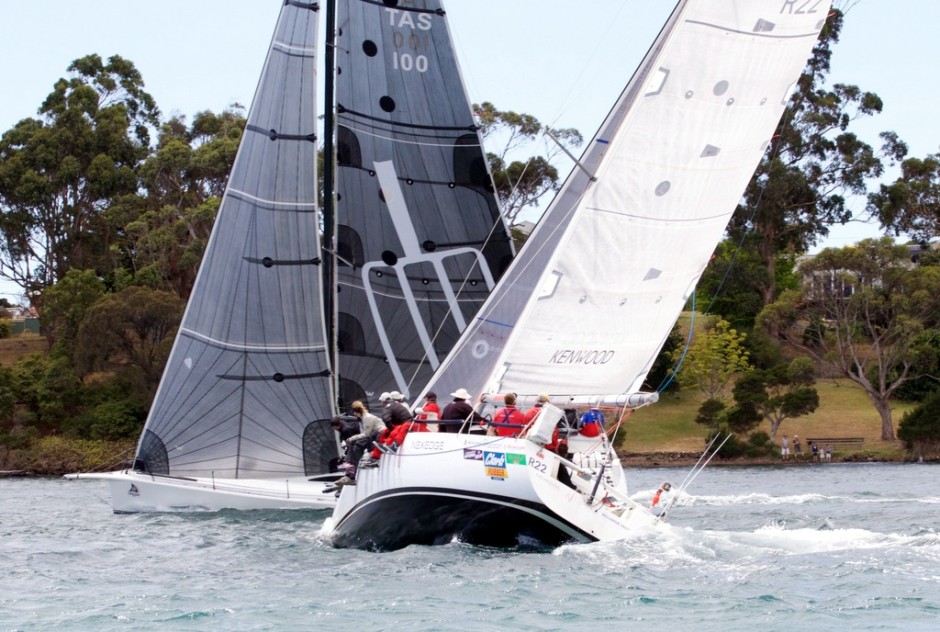 Champion helmsman Gary Smith early this  evening is driving his Launceston to Hobart Race record-holder, The Fork in the Road,  across eastern Bass Strait in a bid to sail through the notorious Banks Strait before nightfall.

Line honours favourite for the 285 nautical mile race around Tasmania’s East Coast, The Fork in the Road came from astern to grab the lead from the 27 boat fleet as they carried big spinnakers in the 20 knot north-westerly breeze.

The fast Bakewell-White 45 had been out-sailed in the beat to windward from the start at Beauty Point down the winding lower reaches of the Tamar River to Low Head.

Smith has expressed concern at sailing through the Banks Strait at night, because of its variable winds and tricky currents and eddies and he obviously hoped to get through the Strait before dark last night and sail into the Tasman Sea. 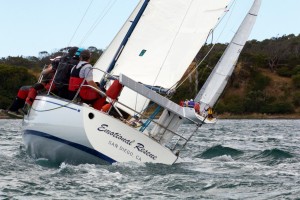 Hobart yachtsman Peter Cretan and his Marten 49 Tilt took first honours in the L2H, the Beauty Point to Low Head dash,  part of the series that includes the Launceston to Hobart and then the King of Derwent on January 2l

Despite a poor start, Tilt worked her way through the fleet to lead out of the Tamar at Low Head and maintained a handy break on a spectacular spinnaker reach  towards Banks Strait.

At that point, passing a line between Low Head and the Farewell Beacons, Tilt was more than a minute ahead of The Fork in Road, followed by John Mills and Ian Douglas’ Nexedge, a past winner of the Sydney Hobart.

Tilt’s lead did not last long, with the wily Gary Smith, a past Olympic sailor and world dinghy champion, sailing The Fork in Road further out to sea and picking up a stronger breeze.

Early this evening,  The Fork in Road was north of Bridport, about five miles ahead of Tilt and Nexedge which were sailing close together.  However, both Tilt, Nexedge and B&G Advantage making faster time from astern.

In fourth place in fleet and well placed on handicap came Jeff Cordell’s Mumm 36 B&G Advantage which won the inaugural Launceston to Hobart Race in 2007.

The Port Dalrymple Yacht Club entrant Obsession, skippered by David Allen was sailing particularly well, leading the next group of yachts that comprises Cromarty Magellan, It Happens and the Victorian entry Remedy.

One yacht has been forced to retire, Michael Rowley’s Rowley’s Planet X suffering a broken about two and half hours after the start.

The crew rigged a jury steering system and motored back to Beauty Point where they were due before 9pm tonight.