The Fork in the Road takes 5th L2H Line Honours 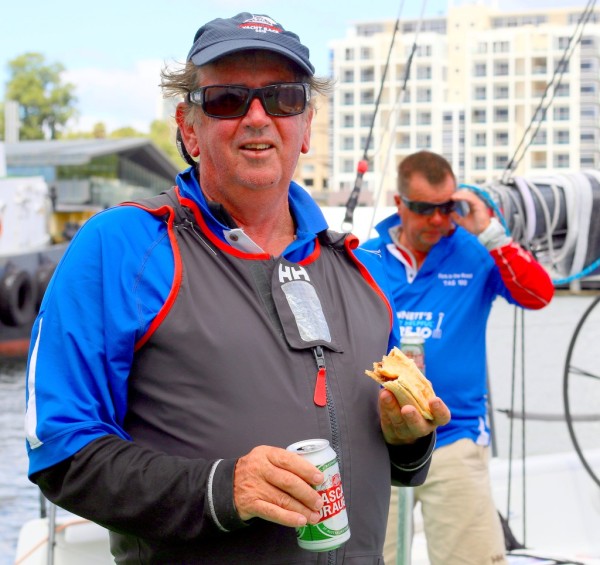 Former Olympic sailor Gary Smith today took line honours in the National Pies Launceston to Hobart Yacht Race with the Fork in the Road, for the fifth time – four consecutively – in what he described as ‘a real boat race’.

The Fork in the Road ended the frustratingly light weather, 285 nautical mile race at 1:30:49pm today, an elapsed time of 2 days and 49 seconds.

The finish was the furthest apart The Fork in the Road and second boat to finish, Peter Cretan’s Tilt, had been throughout the race which started from Beauty Point last Sunday.

Tilt finished off Battery Point (the same finish line for the Sydney Hobart, Melbourne Hobart and Launceston to Hobart races) at 3:39:54pm, just over an hour and nine minutes astern of The Fork in the Road.

“The lead changed five times during the two day race, with Tilt making it a real boat race for us,” Smith said.

“She led us out of the Tamar at Low Head, and then we passed her on the spinnaker reach in Bass Strait to Banks Strait.  Tilt passed us in Banks Strait but we got ahead running the East Coast near St Helens.

“They passed us again in The Mercury Passage but we got a narrow break as we sailed down the Tasman Peninsula, the two of us sailing boat for boat.

“We had race on our hands; Tilt was pushing us all the way, right alongside us at times.

“However, we got a break as we passed Tasman Island and steadily opened up the biggest lead of the race as we sailed across Storm Bay and around the Iron Pot into the Derwent.”

Despite frustratingly light winds in the river, The Fork in Road extended her lead as she close reached from White Rock to Sandy Bay under a lightweight spinnaker specially designed by Wynyard sailmaker and senior crew member Steve Walker.

“We call it the ‘quick and snappy’ kite,  we can hoist or drop so quickly,” added Smith who represented Australia in the Flying Dutchman class at the 1988 Seoul Olympic Games and also won a world championship in the Fireball dinghy.

The crew made full use of ‘quick and snappy’ as The Fork in the Road gybed her way through windless patches over the final two miles to the finish. 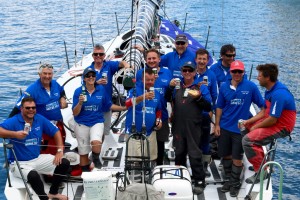 Winning crew of The Fork in the Road. Photo Sam Tiedemann, 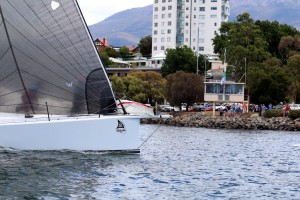 With the north to north-easterly wind varying in strength and direction, Smith skilfully steered the boat through at least six gybes and tacks over the final 500 metres to the line off Battery Point.

Finishing on a bright sunny afternoon, The Fork in the Road was quickly indentified and loudly applauded by people packing the waterfront vantage points at the Taste of Tasmania and lining the Elizabeth Street Pier and the seawall of Kings Pier Marina in Sullivans Cove.

“It certainly was a great reception for us and also for the skipper and crew of Tilt who gave us such a great race,” added Smith who last year was inducted into the Tasmanian Sporting Hall of Fame for sailing, designing and boat building skills in his younger day.

At 5pm, with The Fork in the Road and Tilt safely tied up on the southern side of the Elizabeth St Pier, all but four of the 26 boat fleet was in the River Derwent or well across Storm.

Still at the tailender of the fleet is Pukana, just south of The Mercury Passage, while Lock on Wood has rejoined the fleet after a brief stopover at Triabunna last night.